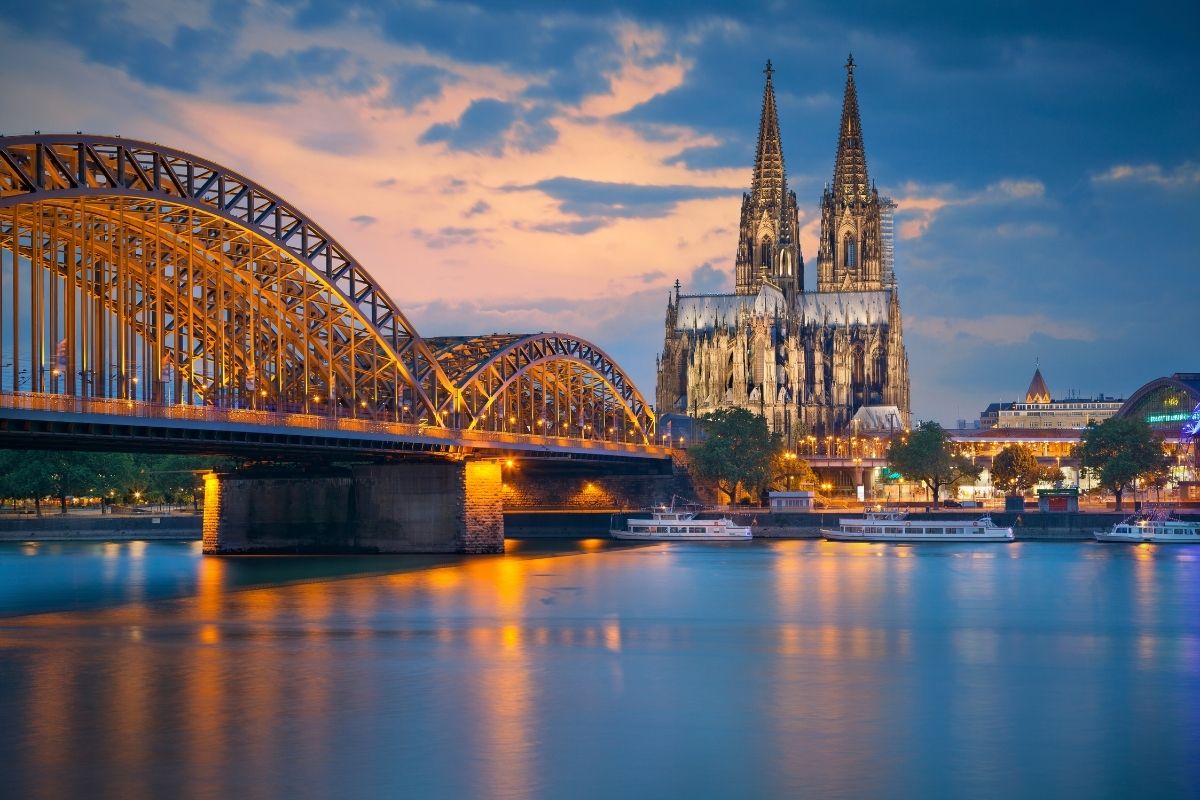 Whether you’re planning your first trip or have been to Germany before, these quotes on Germany are here to inspire you to explore this wonderful country!

Did you know that Germany is rated as one of the best countries in the world for over 50s travel, thanks to its abundant historical sites, jaw-dropping landscapes, and more castles than any other country in the world?

If you love travel quotes, you may also enjoy:

Quotes About Germany by Angela Merkel

“I said, yet again, for Germany, Europe is not only indispensable, it is part and parcel of our identity. We’ve always said German unity, European unity and integration, that’s two parts of one and the same coin. But we want, obviously, to boost our competitiveness”

“We needed 40 years to overcome East Germany. Sometimes in history, one has to be prepared for the long haul and not ask after four months if it still makes sense to keep up our demands”

Quotes on Germany By Other World Leaders and Politicians

“My struggle led to the reunification of Germany and the creation of the state of Europe. We destroyed the borders; globalization is on the horizon” Lech Walesa

“Poor old Germany. Too big for Europe, too small for the world” Henry Kissinger

“In my several visits to Germany, I have written in admiration of that country’s strenuous efforts to face its past and make amends” Richard Cohen

“Russia is Germany’s most important neighbour in the East, and it will remain so” Helmut Kohl

“Germany, I think, was first to substitute a Social Security program for its elderly based on this premise, that is, that we would tax workers to pay retirement benefits for those retired” John Barden Shadegg

“Germany is our fatherland; Europe is our future” Helmut Kohl

Quotes on Germany By Authors

“How rich our German life is compared to France or England: what an abundance of social types and customs with completely different origins; Germany is a world, whereas England and France, with their stereotypically divided three social classes, are but enlarged villages… what a stage for a Balzac” Harry Graf Kessler

“Learning German is what eternity was made for” Mark Twain

“The most interesting legal philosophy is German, so naturally, I went to Germany, particularly to Berlin, quite a bit” Philip Kerr

“In the early days of his reign, Bismarck confided to a friend that it would some day be necessary for Germany to confine William II in an insane asylum” Kelly Miller

“Up until the First World War, when people turned anti-German, Germany had been described by American political scientists as the model of democracy.” Noam Chomsky

“I’m third generation. I was born in Germany, grew up in Germany, and many of my friends are German. I love playing for Germany. I’m proud I can play for the national team” Mesut Ozil

“I’m German in my mind, but from a Germany that doesn’t exist anymore” Kurt Lagerfeld

“I was in Germany when the wall came down” Joe Cocker

“And so we went away to play, and we’d come back to Liverpool. And while we were doing this -cuz we did it for two years. And then we’d go to Germany, and that’s where I met the Beatles” Ringo Starr

“I love driving fast. I grew up in Germany; we have the Autobahn here, where we can drive without a speed limit. And throughout my 20s, I always had fast cars, and I always went to the maximum. Like, my average cruising speed was 250 km/hr” Kim Dotcom

“I learnt a lot in Germany, and the German mentality really helped me. It was an enormous step in my life” Roberto Firmino

“In my several visits to Germany, I have written in admiration of that country’s strenuous efforts to face its past and make amends” Richard Cohen

Quotes on Germany by Craig Robinson

“My first time in Germany. We started off in Heidelberg, which is this quaint, nice town. The Germans, they shoot just like the Americans, except for, if it’s a 10-hour day, they’re leaving at 5. You don’t go to 5:30, 6, 7. No. And then we had a fest for everything”

“When the Berlin Wall came down, my dad left to visit the U.S. He met my mom at this summer camp where they were both working, so I grew up between Washington Heights and Germany speaking two languages”
Zazie Beetz

“I grew up a little bit in Germany and then in Switzerland, then in France, the United States and in England, and so it is weird” Alexander Dreymon

“I liked Germany; I’m not into Berlin, it’s too huge and empty and imposing, but Munich was good” Graham Coxon

“We always have a great time touring Germany, but one of my favourite museums in the world is Museum Ludwig, an incredible contemporary art museum in Cologne. I could spend all day in it” Julien Baker

“I lived in Germany from when I was 6 until I was 10, so, of course, I played soccer. When I came back to the States, nobody played soccer, and none of the schools taught German, so I couldn’t continue to excel in those categories” Kevin Nealon

“For my Oxford degree, I had to translate French and German philosophy (as it turned out, Descartes and Kant) at sight without a dictionary. That meant Germany for my first summer vacation, to learn the thorny language on my own” Paul Engle

“A good 60 per cent of my time I spend travelling, mostly to the U.S., Canada and Germany” Sara Davies

“I grew up in East Germany, and we were short on technology. So my father was really proud to be the owner of a turntable” Apparat

“It was very interesting, and we went to Germany and we toured Germany like we were a German band in 1985” Ruben Blades

“Travelling to Russia and Germany and being able to see the world at a young age was really cool for me, and I really liked that” Mia Wasikowska

A good laugh is such a tonic – these funny quotes about Germany will make you smile.

“The left-hand lane is exclusively for the use of Porsches, BMWs, and Mercedes. Dark-coloured vehicles only, please. If you’re driving a white or silver car, please stick to the middle lane and moderate your speed. Loser!” Cathy Dobson

Quotes About Germany By Sports Stars

“In Germany, they all thought I was a bit mental, very emotional” Jürgen Klopp

“Germany is, of course, my country” Angelique Kerber

“All the dogs I have are German shepherds from Germany, and I fly them back to Germany to show them”
George Foreman

Quotes About the German Language

“Life is too short to learn German” Richard Porson

“Nobody speaks German outside of Germany” Till Lindemann

“In Germany, I am not so famous” Hans Berger

“When I raced with Mercedes, I thought I’d learn German. But my wife didn’t want to live in Germany” Juan Manuel Fangio

Germany’s past is complex, with writers such as Goethe and Schopenhauer, and incredible composers including Beethoven, Bach, Brahms and Mendelsohn, historical destruction and the separation of the country into East and West Germany, and the rise of the modern powerhouse economy. These quotes on Germany are here to give you more information about this rather special country before you visit.

“There’s so many German songs which are really popular in Germany that I find really bad. It can quickly border on kitsch pop” Bill Kaulitz

“The thing that I like about Germany is that Germans are so much like us. It’s not like going to some other countries, where the differences are overwhelming and you walk around in a fog. Germans are so similar to Americans” Matt Damon

“I like the idea of an enlightened principality. In the early eighteen-hundreds, in Germany, there were princes who built schools, streets, homes. I like that” Brunello Cucinelli

“Then this will only prove again and again, that Monarchy in Germany is he longer capable of a national act” Ferdinand Lassalle

“Eating in Germany is easy because there is basically only one kind of food, called the “wurst”. Dave Barry

“….there are more different sausages in Germany than there are breakfast foods in America, and if there is a bad one among them then I have never heard of it. They run in size from little fellow so small and pale and fragile that it seems a crime to eat them to vast and formidable pieces that look like shells for heavy artillery. And they run in flavour from the most delicate to the most raucous, and in texture from that of feathers caught in a cobweb to that of linoleum, and in shape from straight cylinders to lovely kinks and curlicues” Henry Louis Mencken

More Germany content to help you plan your trip:

Planning a trip to Germany? Check out my favourite travel guides and books.

Wrap Up – Quotes on Germany

Germany is such a fascinating country – it’s no surprise there are so many great quotes about Germany! Which ones resonated with you? Are you inspired to use any Germany quotes in your Instagram captions?

221 shares
Manage Cookie Consent
We use technologies like cookies to store and/or access device information. We do this to improve browsing experience and to show personalised ads. Consenting to these technologies will allow us to process data such as browsing behaviour or unique IDs on this site. Not consenting or withdrawing consent, may adversely affect certain features and functions.
Manage options Manage services Manage vendors Read more about these purposes
Preferences
{title} {title} {title}