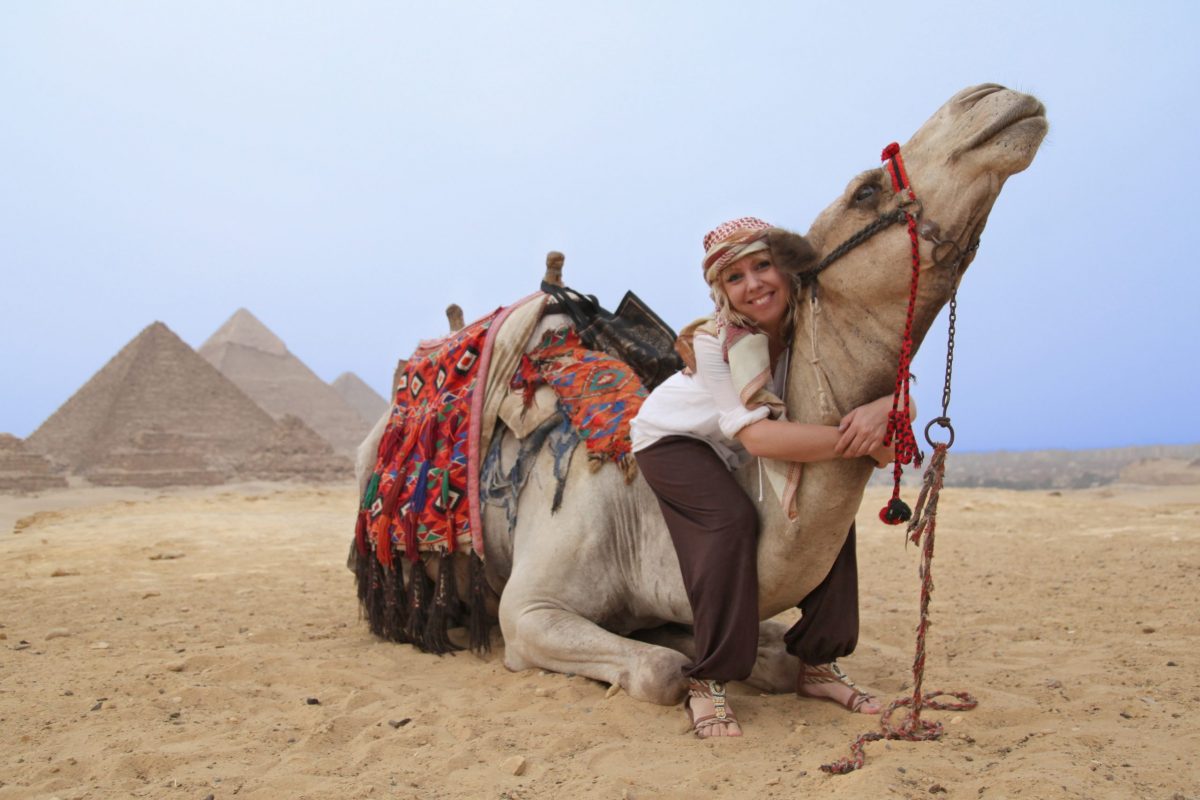 Do you love Egypt? Maybe you’re looking for travel inspiration or hoping to find some short quotes about Egypt for Instagram captions? Well, a browse through these Egypt quotes might be just what you need.

Few countries are as evocative as Egypt. While Athens is recognised as the cradle of democracy, Egypt has far older origins and is part of the area – including Mesopotamia – known as the cradle of civilisation. The oldest hieroglyphs discovered in Egypt date back to around 3,000 BC and the land was ruled by the pharaohs until 30 BC when Egypt became part of the Roman Empire.

This rich history, and the fact that many ancient sites still stand today, draws visitors to Egypt – a country that’s eye-opening, maddening, exciting and frustrating all at once!

Visiting Egypt – especially for the first time – is an assault on the senses, but the positives far outweigh any negatives. I hope you enjoy this list of quotes for Egypt – just don’t be surprised if these Egypt quotes give you severe wanderlust and make you want to visit Egypt straight away! You’ll be all ready to go with Egypt captions for your Instagram!

If you’re hunting for fresh new ideas and Egypt quotes for your Instagram feed, these short quotes might just fit the bill!

“What makes the desert beautiful is that somewhere it hides a well” Antoine de St. Exupery

“Egypt has great potential because of the latent power of its human capital.”Ahmed Zewail

“Egypt has a devout population. People go out, they pray, they fast.” Richard Engel

Literary Quotes on Egypt and Quotes by Authors

Over the years, many authors have drawn inspiration from Egypt in their works, with a wave of “Egyptomania” in Europe during the 18th-19th century. Here’s a short collection of quotes on Egypt from noted literary luminaries:

“The desert could not be claimed or owned – it was a piece of cloth carried by winds, never held down by stones, and given a hundred shifting names… Its caravans, those strange rambling feasts and cultures, left nothing behind, not an ember. All of us, even those with European homes and children in the distance, wished to remove the clothing of our countries. It was a place of faith. We disappeared into landscape.” Michael Ondaatje, The English Patient

“We are like a woman with a difficult pregnancy. We have to rebuild the social classes in Egypt, and we must change the way things were.” Naguib Mahfouz

“The White House – now shares the same name as the new government center in Moscow. The name originally comes from Egypt. The White and Red Houses of the late first dynasty were departments that officiated for the will of pharaoh. The second most important state building in Egypt was the treasury. It was known as Per Hetch, meaning “White House” “. Michael Tsarion

“Ancient Egyptians believed that upon death they would be asked two questions and their answers would determine whether they could continue their journey in the afterlife. The first question was “Did you bring joy?” and the second was “Did you find joy?”Leo Buscaglia

“It has been aptly said, that all of Egypt is but the facade of an immense sepulchre” Amelia Blanford Edwards

“Egypt, the Egypt of antiquity, at a later time, exercised a mysterious fascination over me. I recognized a picture of it immediately, without hesitation and astonishment, in an illustrated magazine.” Pierre Loti

“The people of Egypt are an intelligent people with a glorious history who left their mark on civilization.” Fidel Castro

Quotes on Egypt by Politicians

“You can’t make war in the Middle East without Egypt and you can’t make peace without Syria.” Henry Kissinger

“The Egyptians could run to Egypt, the Syrians into Syria. The only place we could run was into the sea, and before we did that we might as well fight.” Golda Meir

“We are not at war with Egypt. We are in an armed conflict.” Anthony Eden

“There is nothing new in Egypt. Egyptians are making history as usual! Silvo Berlusconi

“Egypt is going through difficult times and we cannot allow it to carry on.” Hosni Mubarak

Quotes On Egypt by Michael Portillo

“Of all the places I’ve visited in my life, Egypt has been the most fascinating. I’ve explored almost the whole country: Cairo and the Pyramids, Alexandria, the temples of Luxor and Karnak, the Valleys of the Kings and the Queens and the Nobles.” Michael Portillo

“I want to travel the world – like Egypt. I love history. That’s my favorite subject at school. From the building of the pyramids to… King Tut. Their way of working without technology. I find all that fascinating.” Millicent Simmonds

“Student journeys which were important to me were Sicily, Greece, and Egypt, where I really saw these buildings, and that is where you’re able to grasp what things mean.” Ben Nicholson

“I’ve never been to anywhere in Africa except Egypt. We’ve never performed there, so I would definitely like to make that trip, probably to South Africa. I’d also like to score a movie from top to bottom. I’ve had songs in a bunch of films but never done an entire movie. I’d like to do that and have it to be a hit, too!” Maurice White

“Whether you’re from Egypt or Argentina or Singapore or Canada, you have a need to feel important, a need to feel secure, and a need to feel loved. The culture and economics just determine how those needs are expressed.” Mark Manson

“I love Spain. It’s my favorite country that I’ve been to and I’ve traveled quite a bit. I’ve been really fortunate as an adult to have been to a lot of interesting places like Egypt and China.” Bitsie Tulloch

“When I lived in Egypt, we always wore kaftans. I had cashmere kaftans from Halston. You put on a kaftan in your backyard, and it’s like you’re in Ibiza.” Iman

“When I go back to Egypt, I call my friend from the airport to buy kushari for us to eat in the car. I pull my hoodie over my head, jump into the car, and then I’m eating it straight away.” Mohamed Salah

“Egypt is not a country we live in but a country that lives within us.” Pope Shenouda III

“Leaving Egypt and the people I loved so much, and the environment I liked, was definitely worth it, because I also have great love for medicine and science.” Magdi Yacoub

“After I was assaulted in Egypt, I learned fear. I’ve just never been so scared in my life. I’ve never been so close to death.” Lara Logan

“Some dog I got too. We call him Egypt. Because in every room he leaves a pyramid.” Rodney Dangerfield

There are plenty of contemporary quotes about Egypt to pick from – here are some of the best:

“Egypt gave birth to what later would become known as “Western Civilization” long before the greatness of Greece and Rome.” John Henrik Clarke

“My mother always used to say, “Well, if you had been born a little girl growing up in Egypt, you would go to church or go to worship Allah, but surely if those people are worshipping a God, it must be the same God” – that’s what she always said. The same God with different names.” Jane Goodall

“In Egypt, the living were subordinate to the dead.” Stephen Gardiner

“God is whoever raised Jesus from the dead, having before raised Israel from Egypt. There is no God but this God.” Stanley Hauerwas

“We of the modern age are a bridge between the old human and the new one. We still have the mentality of the old human – a slave mentality, like the Children of Israel in Egypt: too controlled, full of fear.” Bernard Werber

“The Israelites’ slavery in Egypt is the equivalent of our slavery to sin. God sent Moses to deliver them from bondage, and He sent Jesus Christ to set us free.” Joyce Meyer

“Less than 1 percent of ancient Egypt has been discovered and excavated. With population pressures, urbanization, and modernization encroaching, we’re in a race against time. Why not use the most advanced tools we have to map, quantify, and protect our past?” Sarah Parcak

“India and Egypt have been strongly influencing each other’s culture, arts and architecture since ancient times.” Boney Kapoor

“Itjtawy was ancient Egypt’s capital for over four hundred years, at a period of time called the Middle Kingdom about four thousand years ago. The site is located in the Faiyum of Egypt, and the site is really important because in the Middle Kingdom there was this great renaissance for ancient Egyptian art, architecture and religion.” Sarah Parcak

“Butterfly Mosque” came out of the emails I wrote to family and friends back home after moving to Egypt. Willow Wilson “I have a long view of history – my orientation is archaeological because I’m always thinking in terms of ancient Greece and Rome, ancient Persia and Egypt.” Camille Paglia

“I think it’s always good to read local authors or relevant books. In Egypt, I studied hieroglyphics and read everything about the mummies.” Jane Birkin

“The metaphor of the king as the shepherd of his people goes back to ancient Egypt. Perhaps the use of this particular convention is due to the fact that, being stupid, affectionate, gregarious, and easily stampeded, the societies formed by sheep are most like human ones.” Northrop Frye

“Egypt has suffered more ordeals than the other countries to get where it is.” Tahar Ben Jelloun

“My grandfather sold insurance to King Farouk of Egypt. And my savta’s parents helped found the city of Tel Aviv in 1906. Our family name used to be Mizrahi, but they changed it to Mayron, which means “happy water” in Hebrew.” Melanie Mayron

“Egypt is coming back – is becoming – is going to become, you know, a centre of excellence, for the region, and maybe for the rest of the world” Hesham Qandil

Do you love reading quotes? I’m a little obsessed with them! If you enjoy travel quotes, check out this huge guide – 134 Awesome Quotes about Travel to Inspire Your Travels & Your Instagram Captions.

You may also enjoy

And there you have it! I hope you’ve found all of these Egypt quotes inspiring. Have I missed any quotes on Egypt that you think should be included here? Do let me know which are your favourite quotes about Egypt in the comment box below!

More Egypt content to help you plan your trip:

103 shares
Manage Cookie Consent
We use technologies like cookies to store and/or access device information. We do this to improve browsing experience and to show personalised ads. Consenting to these technologies will allow us to process data such as browsing behaviour or unique IDs on this site. Not consenting or withdrawing consent, may adversely affect certain features and functions.
Manage options Manage services Manage vendors Read more about these purposes
Preferences
{title} {title} {title}