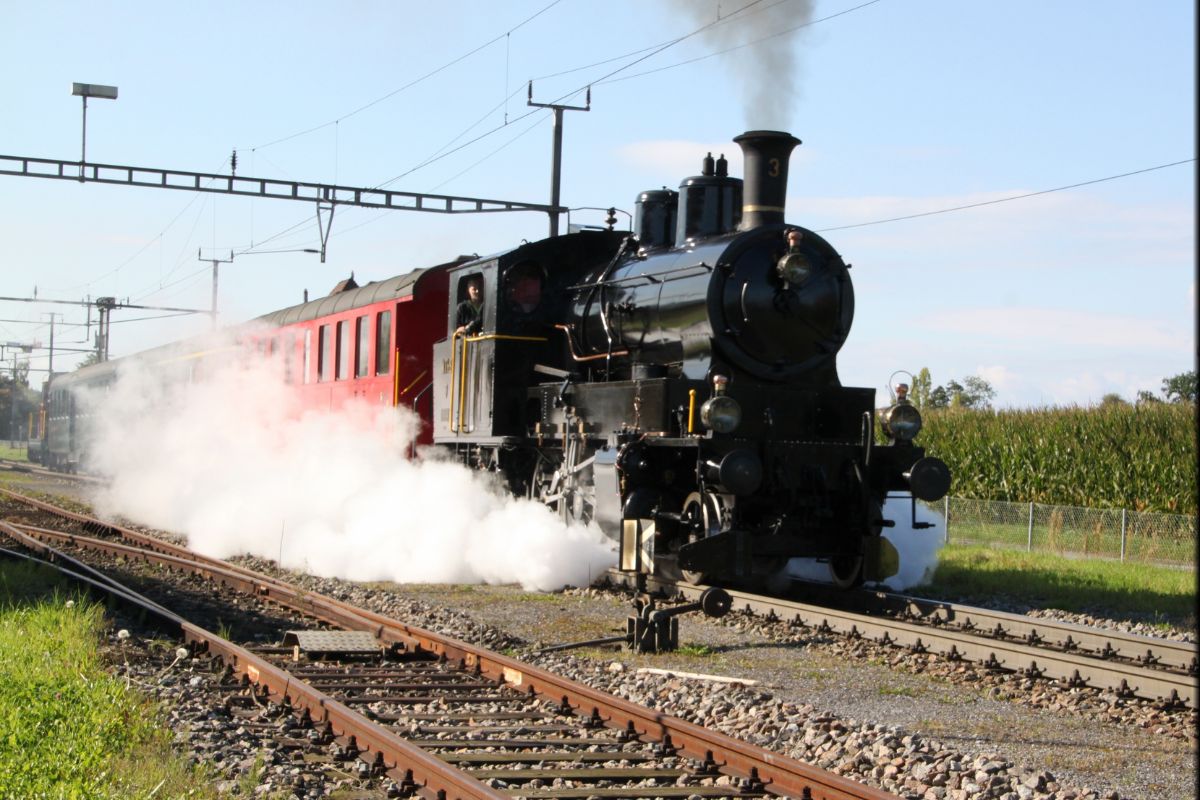 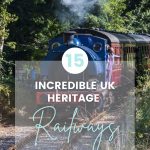 Fittingly for the country that invented steam locomotives, the United Kingdom is blessed with incredible heritage railways.

A splendid day out for old and young alike, some of the best heritage railways in the UK also offer special events like afternoon teas and fine dining, 1940s-themed weekends, and “Rail Ale” trips. Others offer Polar Express and Santa Specials at Christmas – a trip on one of the preserved railways in the UK is always a treat!

You can even book a footplate experience! While some of the heritage railways now use diesel or electric locomotives, many still offer the thrill of a ride behind a steam engine, with all the nostalgic sights, sounds and smells of steam train travel

I fell in love with heritage railways after taking a steam train from Delhi to Agra to see the Taj Mahal. Years later, I visited the war graves in Kanchanburi, Thailand, before boarding a steam train to cross the famous bridge over the River Kwai.

Despite years of commuting, my love of train travel is undimmed, and I still love the romance of steam railways in the UK and am always looking for reasons to visit heritage railways near me!

Why Does the UK Have So Many Heritage Railways?

In the 1960s, as car ownership became affordable for the masses in the UK, road building (including motorways) flourished, and train passenger numbers plummeted. The railways made huge losses.

The infamous Beeching Report (“The Reshaping of British Railways“) recommended a dramatic programme of cuts. As a result, over 2,000 stations and 5,000 miles of track were mothballed.

Most of today’s UK heritage railways were originally branch lines – others were industrial or colliery lines.

How Were the Heritage Railways Built?

After “Beeching”, British Railways had masses of rolling stock and other assets it no longer needed. Trains, train lines – even the Yorkshire stone from Victorian station buildings – were sold off at rock-bottom prices, often to train enthusiasts.

Across the country, bands of volunteers clubbed together, sharing their knowledge, skill, and enthusiasm for steam trains.

Bringing these once-glorious railway lines back to life demanded time, herculean fund-raising, and hours of work to rebuild stations and re-lay track to build today’s Heritage Railways for all to enjoy.

Related Post: Train travel in the UK – Tips, tricks, and everything you need to plan and book your trip

How Many Heritage Railways Are There in the UK?

119 heritage railways are operating across the UK, represented by the Heritage Railways Association.

Which are the Best Preserved Railways to Visit in the UK?

While there is something unique and thrilling about every single heritage railway in the UK, here are just a few favourites to whet your appetite for further exploration!.

I have to start with my first heritage railway experience, which also happens to be the world’s oldest independent narrow-gauge railway. The (almost) 200-year-old Ffestiniog steam railway transports you on a 13½-mile journey from Porthmadog Harbour to the historic slate-mining UNESCO World Heritage town of Blaenau Ffestiniog.

The dramatic route climbs over 700 feet from sea level up into the Snowdonia National Park. On the scenic 2 ½ hour journey, you’ll see lush green pastures, magnificent forests, lakes, and waterfalls.

The most spectacular sections are the tight bends as the tracks hug the side of the mountain and the incredible manually dug tunnels. One part is even an astonishing complete spiral!

Nearby in North Wales: Discover the Incredible Pontcyscyllte Aqueduct

The Welsh Highland Railways is the longest heritage railway in the UK. It runs for 25 miles from Caernarfon, past the foot of Snowdon and the picture-postcard village of Beddgelert, through the incredible Aberglaslyn Pass onward to Porthmadog.

Passengers on the WHR enjoy some of the most comfortable carriages on any heritage railway in the UK. The carriages offer first-class Pullman luxury, and freshly-cooked food is delivered to your seat.

3. Bluebell Railway – One of the First Heritage Railways in the UK

With an 11-mile run through glorious Sussex countryside, the Bluebell Railway is a delight for heritage railway lovers.

There’s also one of the most exciting collections of vintage steam locomotives and carriages in the country to enjoy, many preserved straight from service with British Railways.

In addition to luxuriating in the comfort and style of a bygone era, a visit to the Bluebell Railway offers visitors the chance to learn about the history and science of the industrial age and to experience the thrill of getting up close to a working steam locomotive.

During your visit, you will see railway staff dressed in period clothing and original working signal boxes, plus four beautiful stations preserved in different periods of history, including the Victorian, the 1930s, and the 1950s.

4. The West Somerset Railway – The Longest Heritage Railway in the UK

With 20 miles of heritage railway tracks running through the most beautiful Somerset countryside and coast, the West Coast Railway is a treat to visit.

Sit back and enjoy the journey through the Quantock hills and gloriously quirky-named stations, including Stogumber, Bishops Lydeard and the tongue-twisting Crowcombe Heathfield, in the same coaching stock used in the Harry Potter movies for “Hogwart’s Express”.

5. Keighley and Worth Valley Railway

If you’ve ever watched the film “The Railway Children” or the BBC’s “Last of the Summer Wine“, then you’ve probably already seen the Keighley and Worth Valley Railway in action as it was the Yorkshire steam railway used for filming!

While the Worth Valley branch line closed in 1962, it reopened as a heritage line in 1968, thanks to the work of the Keighley and Worth Valley Railway Preservation Society. Today it’s one of the best heritage railways in Yorkshire.

Join the train from the mainline station at Keighley, the tiny village of Oxenhope or Haworth. You can also book one of the services serving afternoon tea – an enjoyable way to spend an hour or so!

The most famous stretch of this heritage railway is the short section short through the heart of Brontë Country from Oxenhope to the village of Haworth. It’s a short (but steep) walk uphill from Haworth station to the Bronte Sisters House – now the Bronte Parsonage Museum.

Related Post: How to Visit the Bronte Parsonage Museum

The largest preserved heritage railway in the UK in terms of route mileage operated and passenger numbers, the North York Moors Railway spans 18 miles through the very picturesque North York Moors. The line has featured in the TV show Heartbeat, and Goathland Station became Hogsmeade Station for the Harry Potter films.

If you’re staying in London, this is six-mile preserved railway is very convenient to visit, as it’s easily accessible by London Underground from Central London.

The charming countryside line includes a run through Epping Forest and is the longest heritage railway in Essex.

Experience the only double-tracked, mainline heritage railway in the country, where you can enjoy the incredible sight of steam trains passing each other.

Open all year round, the Great Central Railway offers steam train driving and some of the most popular steam train dining experiences too.

This heritage railway in Preston, Lancashire, is small but unique in that the line runs through the middle of town! Uniquely for the UK, this 3-mile return trip crosses a swing bridge before running along the banks of the River Ribble – giving fantastic views of the city of Preston.

There’s also a very good museum with plenty of exhibits from the mid-19th century to modern times, with plenty of opportunities to get close up to steam and diesel trains, and four gala days a year to enjoy.

Steam and heritage diesel trains run throughout the week at this cute heritage railway that offers a 28-mile roundtrip through sleepy hamlets, villages, and the stunning Malvern Hills.

You can also combine a day at the Cheltenham Races with a trip on the Cotswold Steam Railway, as one of the stations is next to the racecourse!

With steam trains running every day from April until October, a scenic Lakeside and Haverthwaite railway trip is a great way to visit Britain’s glorious Lake District – without the hassle of trying to find somewhere to park!

The pretty trip from Haverthwaite Station takes you to the southern tip of Lake Windermere, where you can board a Windermere Steamer to the quaint towns of Bowness or Ambleside.

12. Keith & Dufftown Railway – the most northerly heritage railway in Scotland

The Keith & Dufftown railway runs from Keith to Dufftown. which is known as “The Whisky Capital of the World” because it produces more whisky from its seven working distilleries than anywhere else in Scotland.

This11-mile “Whisky Line” offers stunning views of Balvenie Castle and the spectacular Banffshire countryside – plus the chance to visit a whisky distillery or two for a spot of whisky tasting.

Look out for views of wildlife from this railway – you’re likely to see deer, red squirrels, buzzards, and other large birds of prey too.

Related Post: Discover the Most Beautiful Fairytale Castles in Scotland

While it’s not a heritage railway, this list would be incomplete without mention of the Jacobite Steam Train – made famous by the Harry Potter movies. The iconic trip over the stunning Scottish Glenfinnan Viaduct – is one of the most memorable train journeys in the world – on many people’s bucket lists!

14. Alderney Railway – the most southerly railway in the British Isles

The final remaining working railway in the Channel Islands is on the tiny island of Alderney, which is just 3 1/2 miles long and 1 1/2 miles wide!

The British Government built the Alderney Railway in the 1840s to transport stone 2 1/4 miles from the east of the island to build a breakwater and forts.

At the time, Alderney was strategically important to maintaining British naval dominance in the English Channel, as France extended the fortifications and harbour at Cherbourg. The railway was so important that Queen Victoria and Prince Albert travelled to Alderney to open the railway.

15. The Isle of Man Railway – The longest narrow gauge railway in the UK using original locomotives and carriages.

For a relatively small island, the Isle of Man is blessed with an exciting electric mountain railway, a funicular railway, and a heritage steam railway to tempt train lovers.

The longest narrow gauge steam line in the UK that operates with its original locomotives and carriages, the Isle of Man Steam Railway is a three-foot narrow gauge railway that opened in 1873.

The railway runs from the island’s capital of Douglass through the charming countryside to several destinations in the south, with the one-way trip from Douglas to Port Erin taking 60 minutes. Plenty of the island’s southern heritage attractions are located near railway stations, which makes this heritage railway a convenient way to visit them.

For a special treat, try the tasty menu in the beautifully restored 1905 Pullman style Dining Car, which is one of the world’s few fine dining narrow gauge dining cars.

Do you enjoy visiting steam railways and heritage lines? Which ones have you visited, and which was your favourite? Is there a unique heritage railway in the UK still on your bucket list? Please let me know in the comments! As always, I love to hear what you think x

178 shares
Manage Cookie Consent
We use technologies like cookies to store and/or access device information. We do this to improve browsing experience and to show personalised ads. Consenting to these technologies will allow us to process data such as browsing behaviour or unique IDs on this site. Not consenting or withdrawing consent, may adversely affect certain features and functions.
Manage options Manage services Manage vendors Read more about these purposes
Preferences
{title} {title} {title}