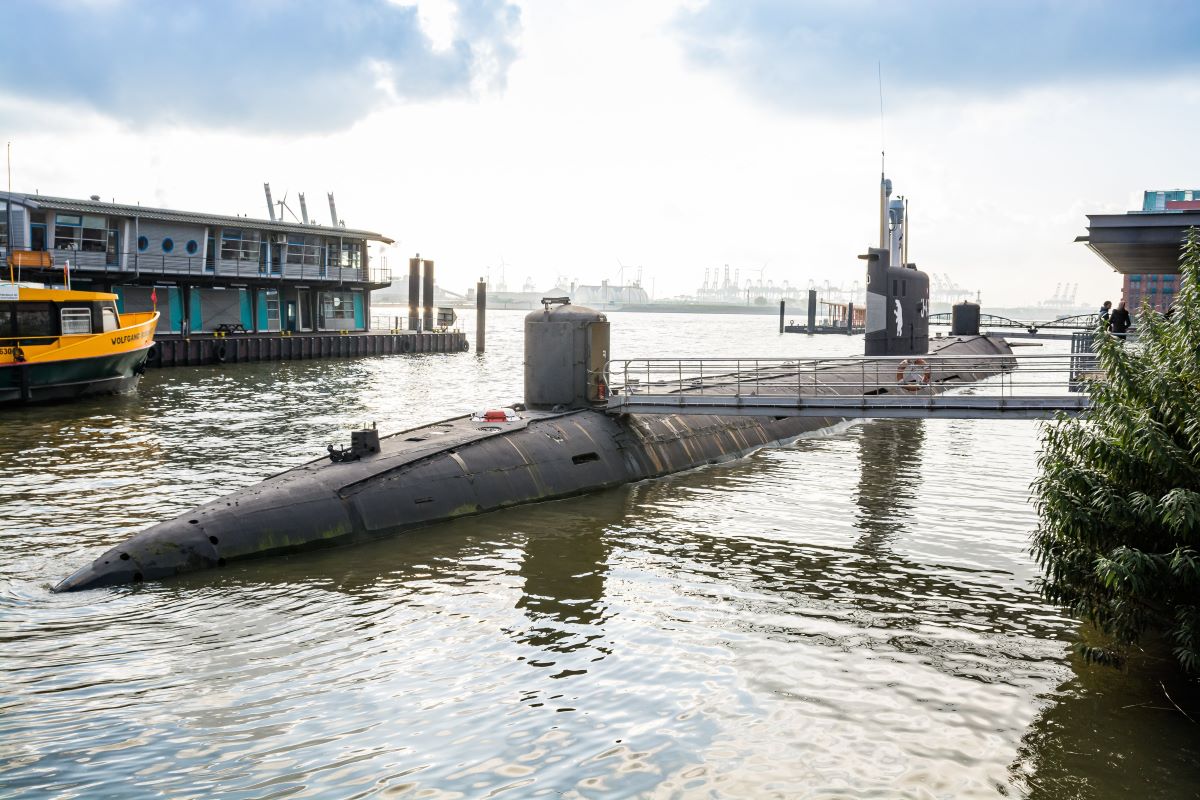 How often do you get the chance to explore a fully operational Soviet submarine? The U-Boot Museum Hamburg (also known as the German submarine museum) is one of the most rewarding things to do in Hamburg and one of the best museums to visit in this vibrant, sprawling German harbour city.

Whether you lived through the Cold War, love military history, or simply want to explore something a little different, the U-Boot Museum in Hamburg is fascinating!

If you enjoy visiting submarine museums, you might also want to explore a British submarine -head to the Royal Navy historic dockyard in Portsmouth for a simply fabulous day out!

The Submarine Museum Hamburg – Know Before You Go

Read on the find out exactly what you need to know about visiting this unique hidden gem that was on active service in the Russian Navy until April 2002, including how to get there, plus exactly what to see and do on your visit to this submarine in Hamburg.

You’ll also discover what life was like for the crew and find out what the “creeping machine” was.

How to get to the U-Boot Museum Hamburg

By train: The U-boot museum is a very short walk from the Landungsbrucke subway station and the Hamburg fish market

Accessibility at the German U Boat Museum

The inside of the submarine is much smaller than you might expect. It’s quite cramped and narrow, with vertical steps to climb and hatches to clamber through, so it’s unsuitable for people with physical limitations (or if you are claustrophobic). There is no access for wheelchair users.

Tickets for the U Boot Museum Hamburg

Guided tours: €5 per person, however, these are only offered in German.

We joined the guided tour as it’s the only way to see inside the control room on the submarine. With my schoolgirl German from many years ago and the teen boy’s GCSE German, we picked up most of what the guide was talking about!

OK – Why is there a Russian Submarine in Hamburg Harbour?

Soviet submarine B-515 was a Tango-class submarine built in 1976 and used for hunting, espionage, and patrol purposes. When it was decommissioned, a group of investors bought it for a million Euros and towed it to Hamburg.

Before transferring the submarine, the Russian Navy removed the weapon systems, control systems, and technical equipment subject to secrecy rules. The major systems, such as the engine and hydraulics, were also deactivated.

Then, when B-515 arrived in Hamburg, large holes were cut in the fuselage at the bow (front) and stern (rear) to provide visitor access. As a result, the submarine is no longer capable of diving or independent operation.

7 Things to see at the U-Boot Museum Hamburg

After crossing the bridge from the ticket office, entry to the submarine is via a specially constructed entrance hatchway and steps at the boat’s bow (front end).

Fun Fact: A submarine is always known as a boat – never a ship!

The bow of the boat houses the imposing torpedo room, with its six empty torpedo tubes. Ten submariners looked after these. Two torpedo tubes could be loaded simultaneously, but it took three people to do it!

After the torpedo room, the next area is the officers’ mess and accommodations where the five most senior officers (including two doctors) lived. This area also includes (very sparse) medical facilities.

Every inch of space had a purpose, with some serving double duty – the officers’ mess was also the medical emergency operating room!

3. Check Out the Command Centre

This is the area that’s only accessible on the guided tour.

Then there’s the central office with the telephone exchange connecting the bridge with the rest of the boat and the engine telegraphs connected to the engine room.

Up to 84 men were squeezed on board this Russian submarine – 16 officers, 16 NCOs and 52 other sailors of varying ranks.

Depending on seniority, officers and NCOs either had single or shared (up to 4 bunks) cabins. The rest of the crew slept on camp beds located on the lower deck – wherever space permitted.

The crew operated two watches or shifts, so every bunk or camp bed was used twice in each 24 hour period – once by the first shift, and then by the second shift.

Three chefs kept the crew well-fed, with a hot meal twice daily. Food storage was a real challenge, with provisions stashed around the boat to ensure supplies did not run out!

The chief engineer had a team of 11 engineers working to keep all three of the 6-cylinder turbo diesel direct injection engines in working order. There is plenty of tech for budding engineers to enjoy in this section,

6. Discover the Secrets of the E-Machine Room

Manned by 8 engineers, this room held the submarine’s secret espionage weapon – the creeping machine! In addition to the 3 electric motors, this submarine had a very quiet crawl speed motor, allowing the boat to run unnoticed in espionage areas!

The final section of the U-434 submarine is where the hydraulic system for the rudder is installed. it’s also where you can learn about the 5-bladed propeller and how it works.

As you can see, the U-Boot Museum is the perfect quirky museum to add to your visit to Hamburg – even if you’re only on a short break!

If you love military history, you might also enjoy these articles