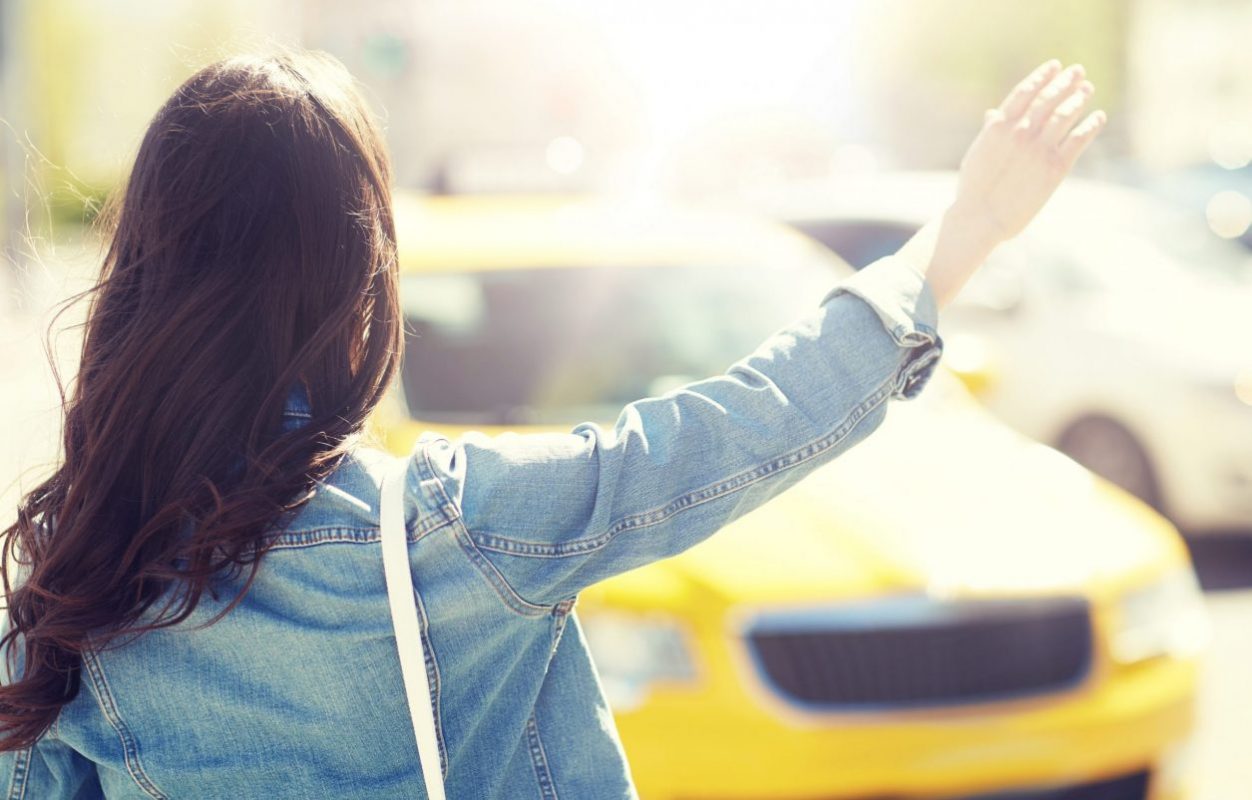 Taxis can be convenient and safe for solo female travellers, especially at night, in high-risk areas, or on arrival in a new place after a long flight.

I’m a huge fan of using taxis when safe, reliable and sustainable public transport is not an option. But, I’ve had bad experiences too, and know there are safety risks in using a taxi, particularly for women travelling solo. This article shares practical taxi safety tips for solo female travellers.

The first of my easy taxi safety tips is to make sure you’re aware of the potential pitfalls of taxi travel.

According to Uber, more than three thousand sexual assaults were reported to them in the United States in 2018. These reports encompassed everything from non-consensual kissing to groping, attempted rape, and rape. A shocking 235 reports were for rape (an average of four a week), with 280 for attempted rape.

More sobering is that Uber’s numbers are based on reports filed by riders and drivers. Actual numbers could be much higher as many sexual assault victims are too traumatised by their experience to file a police report.

Is Uber and other rideshare companies less safe than other forms of transport? It’s important to remember that these incidents are a tiny fraction of the 1.3bn+ Uber rides in the US in 2018.

In the same year, in the United Kingdom, there were 151 police investigations into rape by taxi drivers and 353 other sexual assault allegations.

What these figures highlight is that more needs to be done to improve taxi safety conditions – especially for women and particularly for solo female travellers.

This insight is a stark reminder of how important it is to know a few taxi safety tips and to focus selfishly on your own security when using a taxi – whether you choose rideshare or a licensed taxi.

Always follow these three Uber safety tips when you request a ride to make sure you’re getting into the right car with the right driver:

Taxi Safety Tips – Before You Travel

Here are some things you can do that will help with how to be safe in a taxi alone.

1. Ask your hotel to book your taxi for you

If you have a late-night or early morning flight, ask your hotel to book a ride for you rather than stepping out into the street and hailing a cab.

Many hotels can also help with booking a taxi to pick you up from the airport when you arrive. This is especially useful if you’re visiting a new place/country or if you know you’ll arrive tired and jet-lagged with only half of your brain working!

2. Check and Save Emergency Contacts

An essential part of your travel planning is to check and save emergency numbers for the country or countries you’ll be visiting – especially for the police. Hopefully, you’ll never need to use them.

It’s also wise to have a list of trusted contacts saved as emergency contacts on your phone in case you need them or if you’re in an accident and the emergency services need to reach your nearest and dearest. Here’s a practical step-by-step guide for how to set up emergency contacts in your phone that can be accessed without having to unlock the screen.

British solo female hiker, Esther Dingley (37), lost her life doing what she loved – hiking in the Spanish Pyrenees. While her death is believed to have been an accident, the agony was prolonged for her loved ones, as it took almost ten months for her body to be discovered.

You may want to consider enabling GPS tracking for this extra security. You don’t need an internet connection, and it’s easy to do.

One of the most critical taxi safety tips is to check whether your taxi is a legally registered rideshare service or an official taxi and to make sure you know what official taxis in the area look like.

Most taxis waiting for fares at the airport are official, as they need a license to operate within the airport. Elsewhere there are also unofficial taxis – especially in cities. When I worked in London, I’ll admit that sometimes I used these unlicensed taxis.

Several times, although we agreed on the price upfront, the driver demanded more money during the journey, claiming the mileage was further than expected!

I decided never to be lured in again with the promise of a cheaper fare after one terrifying night when my taxi’s wheel came off as we were barrelling down the motorway at 70mph. The driver swerved to a halt just as we hit the motorway barrier. Then he scarpered like a ghost into the night, abandoning my female colleague and me to the freezing November drizzle.

The attending police officer said we’d been seconds away from crashing through the barrier and plunging into the ravine below. He also said the vehicle was an untaxed death trap, and the driver had probably fled because he was uninsured. OMG!

While it’s now possible to pay digitally for taxis, there are still many places where cash is king. Be prepared for this. As part of your trip planning, check whether you need to pay cash for taxi fares.

If cash is the norm, make sure you have a mixed supply of local currency, with plenty of small notes. Consider stopping for a moment in the airport to buy gum or a bottle of water so you can break up any large notes.

You might like to use a money belt to keep your sash safe when travelling – but keep enough smaller notes in an accessible pocket ready to pay the driver. It’s a common scam in some countries for drivers to give the wrong change when they are paid with large notes or to provide the right amount of change but in forged banknotes (this happened to me in Bulgaria).

Taxi Safety Tips – During the Ride

Once you’re in the taxi, here are some things to be aware of:

1. Check and Agree on the Price Before Getting in the Taxi

In the United Kingdom and many other countries, I’ve visited, licensed taxis are the norm, with a meter that calculates the fare based on the distance travelled. This is not, however, this is not the case in every country.

Top Tip: If the taxi doesn’t have a meter, check how much the ride will cost before getting into the vehicle, and be clear that this is what you’re prepared to pay.

2. Always Take the Back Seat

While there are different cultural norms about whether it’s OK to sit in the passenger seat next to the driver, the safest place to sit in a taxi is in the back seat.

Using the passenger seat is a travel mistake I won’t be repeating.

Reasons why you should sit in the back seat of a taxi:

I used to worry about the driver seeing that I was tracking the journey, thinking it might offend them. Today, I’m entirely overt about it after an experience in Paris where the driver tried to explain away a ridiculous detour.

Letting the driver know that you are tracking the way they drive is a good way to improve your safety (and your bank balance).

3. Never Stow Your Bags in the Trunk

In addition to sitting in the back seat, make sure you keep all of your bags with you. One popular scam is for unscrupulous taxi drivers to stop, ask for your fare and let you out to collect your bags from the trunk, then drive off as soon as you are out of the vehicle.

If you absolutely must put your bags in the trunk:

Don’t see your taxi ride as an opportunity to switch off completely and relax. Be overt about checking the meter and the route, in particular:

Always drop into conversation that your boyfriend, husband, or local friend is waiting for you at your destination. In some countries, it’s also a good idea to wear a fake wedding ring! I wore one every time I visited Egypt – it’s one of the most straightforward taxi safety tips to adopt.

6. Master a Few Phrases in the Local Language (or Use Google Translate)

It’s unrealistic to expect every taxi driver in every country to speak English, but being able to communicate is vital for your own safety. Having a working knowledge or even a smattering of basic phrases in the local language can help enormously.

I’ve found that people love it when you make an effort to speak their own language and have always tried to learn these words wherever I go:

Google Translate is helpful too. One of the stock phrases I am always ready to use is “I’m meeting my husband”.

Some years ago in Egypt, I saw three tipsy and scantily-clad young European women tumbling out of a taxi at a 5-star hotel in Cairo. They attracted a lot of unwanted attention. Fortunately, there were three of them in that taxi!

Respecting the local culture and wearing clothes that won’t offend is an excellent way to stay safe when travelling – especially as a solo female traveller.

Are taxis safe? Most taxi drivers are good folks, doing an honest day’s work with the expectation of getting paid for their efforts, and they have to deal with plenty of bad behaviour from passengers.

Most drivers I’ve met, at home in the UK and all around the world, have been friendly and helpful. But there are bad actors too – use these taxi safety tips to be well prepared and to stay safe.

Coralie is an over 50s travel writer based in Yorkshire in the UK who writes engaging travel tips, destination guides, and detailed itineraries about the UK, Europe and beyond to inspire boomer travel. When she's not travelling, she's either planning a new trip, exploring locally in the UK, visiting castles and cathedrals, or finding somewhere new to enjoy afternoon tea.

I'm passionate about helping make travel after 50 easy, fun and exciting for you. Grey Globetrotters shares practical travel tips and detailed travel guides to help you plan and book your next trip. Read more about my story >