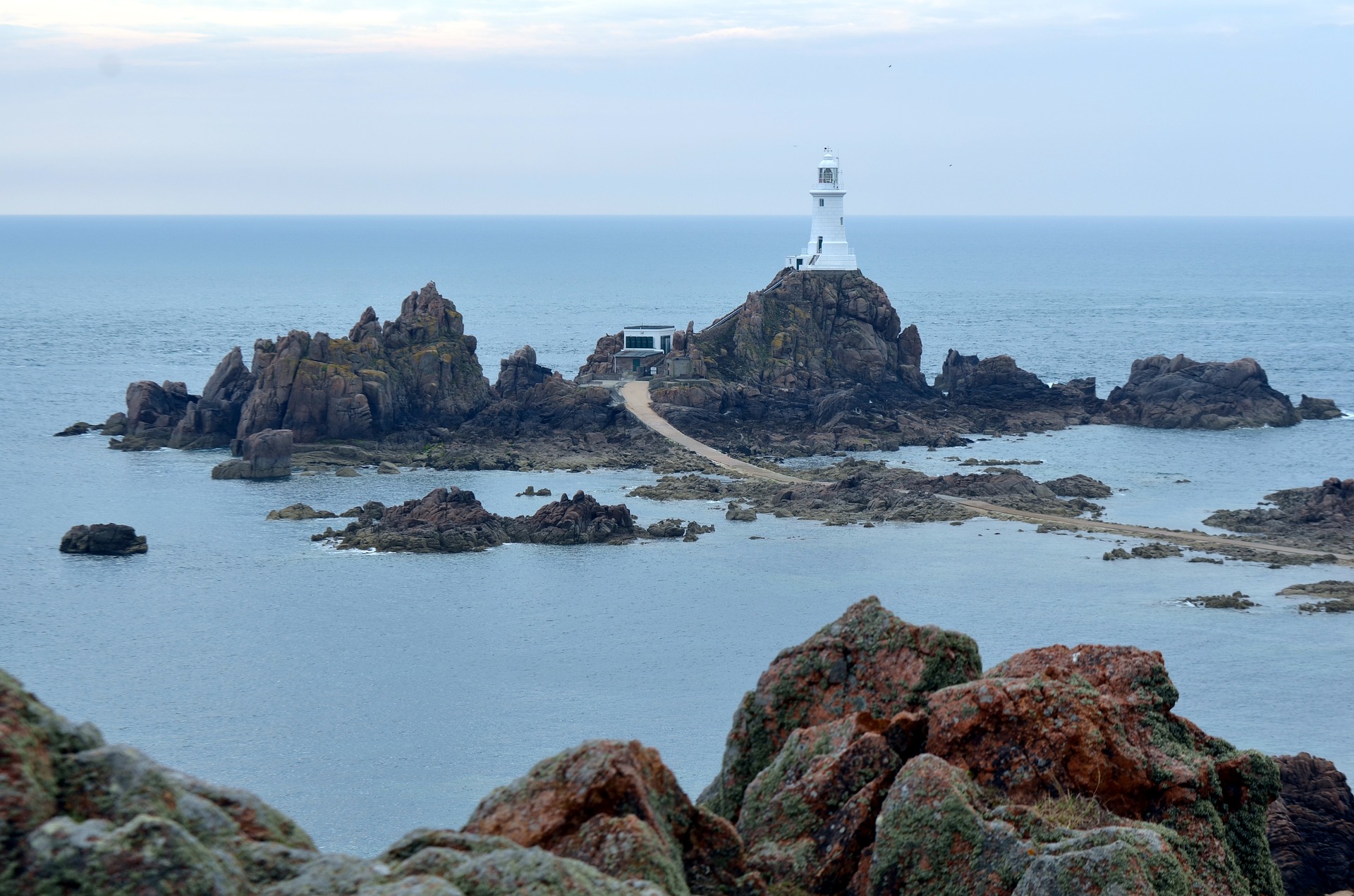 The iconic landmark of La Corbiere Lighthouse is the most photographed spot in Jersey in the British Channel Islands and it’s not difficult to see why.

The picture postcard-pretty white lighthouse stands proud on a rocky islet at the extreme southwest tip of the island, warning shipping and sailors of the treacherous currents and vicious rocks nearby.

La Corbiere is the most southerly lighthouse in the British Isles and the first to be constructed from reinforced concrete. It’s also the only one on British land to have been commandeered and operated by German soldiers during WWII.

I grew up living in Jersey and know La Corbiere well, but I’ve still not been inside the lighthouse. Tours are available with local Blue Guides to learn more about this iconic Jersey landmark, but full tours of the lighthouse are not currently operating. New tour dates will be announced here.

The name “La Corbiere” was first recorded in the 14th century and is believed to come from the French word “le corbin”, meaning “the place where crows gather”. As crows are believed to symbolise bad luck and death, it’s easy to see why a place that had seen so many perish over the years, would attract such a gloomy name.

In the centuries before the lighthouse was built, many ships came to grief while navigating the treacherous rocky southwest coast of Jersey, with shipwrecks recorded as early as the 12th Century. One of the ships wrecked was the Express, a South Western Steam Co mail ship that sank on 20 September 1859. Another was the Echo which sank in 1889 with all souls aboard lost.

Fun fact: When a racehorse named “Corbiere” won the British Grand National in 1983, many Islanders placed bets on him to win, costing local bookmakers a fortune!

Engineer Imrie Bell started work building the 19 m (62 ft) high lighthouse, designed by Sir John Coode, in the 19th century. The building work was completed in 1873 and the lamp which stands 36 m (119 ft) above high water spring tides was first switched on 24 April 1874, before being automated a century later in 1976. The light is visible for 18 miles (29 km) in clear weather.

Beware of the Tide at La Corbiere Lighthouse!

At low tide, the lighthouse is connected to the shore by a six-foot-wide, 1/4 mile-long concrete tidal causeway, which rises and falls between one to eight feet from the rocky seabed. Fully exposed and safe to walk at low tide, this causeway is completely covered by swirling, dangerous seawater as the tide comes in.

Jersey has some of the biggest tides in the world, averaging 12 metres, however, these tides vary during the month, and the causeway out to La Corbiere is a great place to see the massive difference between low tide and high tide.

On the side of the causeway, there is a stone plaque commemorating the loss of assistant lighthouse keeper Peter Larbalestier, who had not long returned to the island after fighting for his country in WWII. Tragically, he drowned while trying to rescue a visitor who had been cut off by the tide, on 28 May 1946.

“Take heed all ye who pass by” reads the inscription. It’s a fair warning of the power of the sea, and of the speed at which the tide comes in at this remote point.

Plan to arrive at or just before low tide and you’ll have several hours to explore and take photos. There’s something magical about being able to walk along the recently exposed rocky seabed, peering into rockpools as sea birds swirl and call overhead, with the sound of the nearby sea in your ears and the tang of salt air all around.

As you approach the causeway, you’ll see warnings about the dangers of walking out to the lighthouse and that the causeway is covered at high tide. Sirens sound to provide good warning and plenty of time to get back to shore.

In April 2016, a couple of tourists had to be rescued from rocks at La Corbiere. They had been taking photographs and ignored warnings about the incoming tide. Read more…

Is it Dangerous to Visit La Corbiere Lighthouse?

It could be if you don’t follow a few simple rules:

If you follow this guidance, you’ll have a safe and exciting visit.

The Most Exciting Time to Visit La Corbiere

La Corbiere is at its most exciting to see during stormy weather when the sea is whipped up like foam and the waves are crashing all around. In really big storms, you can even see the waves crashing right over the top of the lighthouse. It’s spectacular, but it must have been terrifying for those old lighthouse keepers!

How to Get to La Corbiere Lighthouse

Depending on when you plan to visit, La Corbiere Lighthouse is about a 30-minute drive from Jersey’s principal town of St Helier, or 15 minutes from the pretty village of St. Aubin. There is plentiful free parking available at the site, but be warned, some of it is accessed via a very steep path!

Jersey has no trains or trams, however, there is a reasonable bus service. The number 12 and 12a buses from St Helier both terminate at La Corbiere Lighthouse. Services are more frequent during the spring to autumn peak tourist season than from autumn to spring, however, you can check the Liberty bus timetable here.

On Foot or Bicycle

Jersey’s long-abandoned railway track provides a pleasant and popular route to walk or cycle from the harbour village of St Aubin to La Corbiere lighthouse. Set away from any roads and lined with trees, this is a lovely 3.5-mile walk. Walking at a leisurely pace, it should take no more than one and a half hours for you to reach the lighthouse, taking in the beautiful scenery as you pass by.

There’s a little supermarket in St Aubin where you can buy water for your walk.

Walking is the best way to visit La Corbiere lighthouse in good weather. It’s also the best excuse to reward yourself with a delicious homemade Jersey ice-cream when you arrive, from the ice cream van. Just watch out for the opportunistic seagulls that will dive-bomb you and try to steal your ice cream !! If you don’t fancy the walk back, take the bus instead.

There are lots of places to hire bicycles in Jersey, particularly in St Helier, but Jersey Bike Hire located at the very start of the Railway Walk to La Corbiere is the most convenient for this trip.

What to Wear for a to Visit La Corbiere Lighthouse

The lighthouse is in a very exposed spot. The weather here can change in minutes from bright sunshine and the bluest of blue skies to windy and chilly. Take a warm layer, even if you’re visiting in high summer. You’ll also want sturdy shoes/sandals (not flip flops) to cope with walking along the uneven causeway and the seabed.

When to Visit La Corbiere Lighthouse

As La Corbiere is located on the south-western tip of Jersey, the best time to visit is as sunset approaches. You’ll probably take the most memorable photos of your whole visit at sunset.

While You’re at La Corbiere Lighthouse

You’ll notice signs of two concrete bunkers to the right of the car park as you approach the lighthouse. These are part of the island-wide fortifications built by German occupying forces during WWII, when the Channel Islands were the only part of the British Isles to be invaded and occupied by Germany. The bunkers offer a fascinating glimpse into what life was like for the occupying soldiers and local people. “Strongpoint Corbiere” is well worth a visit.

Find more details of the bunkers and opening times here.

You may also like: Visiting the Jersey War Tunnels

Looking west from La Corbiere, you’ll see the vast sweep of golden sand that locals call the “five-mile beach”. St Ouen’s Bay is Jersey’s surfing paradise, where Atlantic breakers roll in and brunch at Big Vern’s cafe is legendary. Tarry a while and enjoy.

St Ouen’s bay is hauntingly beautiful at every time of day. I challenge you not to fall for this wild and windswept western edge of Jersey. You’ll soon understand why so many people fall in love with Jersey and you’ll be planning your next trip.

You may also like: A Complete Guide to Jersey’s Beaches

How to Visit Jersey

Jersey is less than one hour away from most UK airports and 4-8 hours away by ferry from Poole or Portsmouth.

Jersey is less than 1 hour away from most UK airports and 4-8 hours away by car ferry from Poole or Portsmouth. The way I find the cheapest fares is to use MoMondo or SkyScanner. They check prices and availability with all of the airlines flying to Jersey and always offer the best fares.

Where to Stay in Jersey

Jersey has a good mix of accommodation, from value B&Bs to luxury hotels. I always book accommodation with Booking.com because they offer the best deals. My favourite places to stay in Jersey are:

Jersey is not part of the UK and there’s no NHS! While there is an excellent hospital, if you need any medical treatment, it will be expensive!

Travel insurance covers you against any cost or losses if something should go wrong when you’re away. It will help you if your holiday plans are disrupted or your accommodation gets cancelled, and it’s essential if you injure yourself or if your possessions are stolen, lost, or damaged while travelling. I buy an annual travel plan from World Nomads because their rates are fair and their service is outstanding.

Flights to Jersey are regularly disrupted by fog or “sea frets”, so good travel insurance is essential for your trip!

Coralie is an over 50s travel writer based in Yorkshire in the UK who writes engaging travel tips, destination guides, and detailed itineraries about the UK, Europe and beyond to inspire boomer travel. When she's not travelling, she's either planning a new trip, exploring locally in the UK, visiting castles and cathedrals, or finding somewhere new to enjoy afternoon tea.

2 thoughts on “All You Need To Know Before Visiting La Corbiere Lighthouse, Jersey”

I'm passionate about helping make travel after 50 easy, fun and exciting for you. Grey Globetrotters shares practical travel tips and detailed travel guides to help you plan and book your next trip. Read more about my story >

Get Tips in Your Inbox