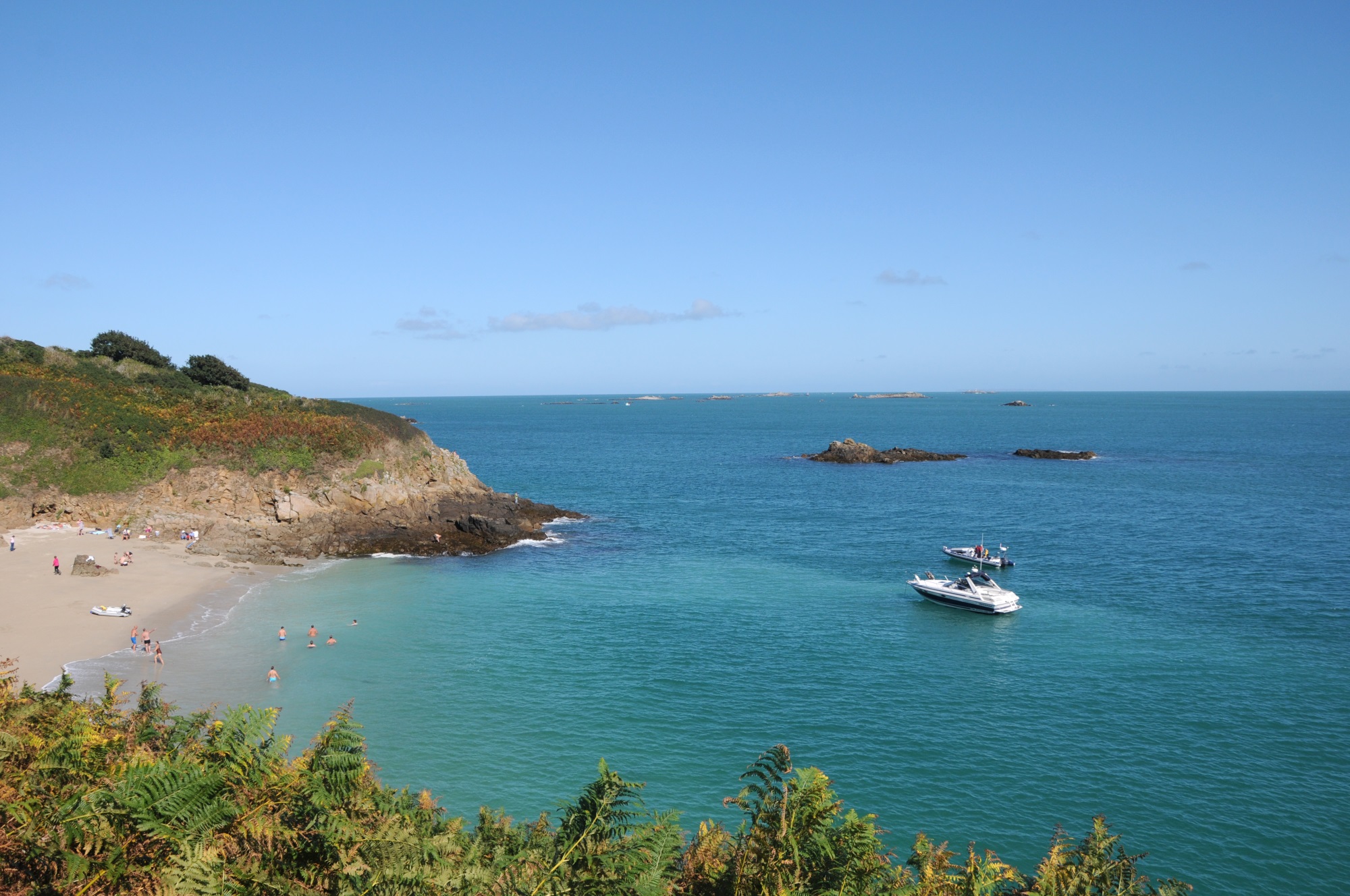 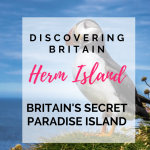 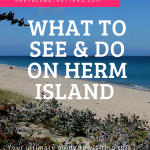 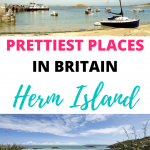 Nestled in the English Channel and bathed in the warm waters of the Gulf Stream, idyllic Herm Island lies just 20 minutes by ferry from Guernsey, the second largest of the British Channel Islands. This small island, set in a turquoise sea, is the perfect place to escape and relax away from the cares of the world.

At just 1 ½ miles long by ½ mile wide, the island of Herm punches well above its weight, with breathtakingly beautiful beaches offering superb water sports, puffin watching, scenic walks and some of the best seafood you’ll ever find.

At first glance, the island of Herm might seem like a small dot in the ocean that you could explore in just a few hours. And, of course, you could do exactly that, but you would be missing the point of Herm.

From the moment you arrive, this tranquil little island starts to weave its magic.

From the moment you step off the jaunty little ferry, you’ll feel like you’ve escaped the hustle and bustle of daily life. Soon, Herm will cast her spell on you, and you’ll discover why so many visitors return to the island time after time – and why so many people choose to spend a week or more here.

It’s not just human visitors who love Herm either. In 2016 the island of Herm was recognised by the Ramsar Convention for supporting a “rich diversity of flora and fauna”.

Herm is located in the English Channel, to the northwest of France and south of England.

Things to know before your trip to Herm!

One of the best things to do on Herm is to ramble along the scenic footpaths, relishing the wind in your hair. Walking at a very leisurely pace, you can walk right around the island in a couple of hours, and your camera will be packed with photos!

Take in the views across the bay to Guernsey with yachts scudding by and sea birds calling before stopping off for refreshments at the Island’s only pub, the Mermaid Tavern.

Bicycles are not allowed on Herm, so you can’t take one on the ferry.

The trusty little local ferries that chug back and forth from Guernsey’s St Peter Port to Herm aren’t geared up for passengers with huge bags, but you’ll probably see locals on the ferry stocked up for a picnic!

Pro Tip: You’ll have to carry everything yourself, as there are no cars, porters or luggage trolleys on Herm, although there is a luggage tractor service for island guests.

Herm’s pocket-sized coastline has six glorious and quite different beaches. From the ever-popular Shell Beach – strewn with tiny white shells washed up by the Gulf Stream – to the seclusion and tranquillity offered by Oyster Bay, there’s a beach to suit all visitors.

The gently lapping turquoise water provides a welcome break from the sun’s rays, and you’ll be spoiled for a choice of water sports to try.

Pro Tip: Don’t let the gentle sea breeze fool you – you’ll need lashings of sun protection cream. The beach cafes are well stocked if you forget to bring yours.

Things to Do on Herm

Herm’s beaches are beautiful, and none are more than a gentle stroll away from the ferry or the island’s accommodation. Shell Beach and Belvoir Bay, on the east coast, are the most well-known and busiest.

Some beaches are serene and quiet, while others offer an enticing variety of water sports, including paddle boarding, kayaking and diving. The crystal clear waters are perfect for snorkelling in the shallows, and the rock pools teem with life when the tide goes out.

Check out Jersey’s best beaches if you’re a lover of a fine beach. You might be inspired to book a multi-island trip!

As the puffin colonies are on inaccessible rocky outcrops, the best way to see them is with a 2-hour puffin patrol by kayak from Outdoor Guernsey.

Here’s a fantastic step-by-step guide on how to photograph puffins in the UK.

3. Watch out For Seals on “The Humps”

There’s a colony of Atlantic seals to spot on the northern outcrop known as The Humps.

If you’re lucky, you might also see harbour porpoises and the three different types of dolphins that visit the Channel Islands frequently (Risso dolphins, bottlenose dolphins, and common dolphins).

The Channel Islands Way is a series of stunning coastal walks around the five largest islands making up the British Channel Islands. The walk around Herm should only take a couple of hours, but there are plenty of places to stop off and enjoy the view. Or the sea. Or ice cream!

This tiny islet (also known as “Rat’s Island”) is linked to Herm via a low causeway at low tide. About 250 metres off the Western Coast of Herm (between Fisherman’s Beach and Bear’s Beach), the islet becomes an island twice a day when the tide comes in.

Top Tip: Visit on an outgoing tide to avoid the risk of getting stranded on Le Hermetier for many hours until the tide changes!

Excavated in 1841, this neolithic dolmen or burial chamber is located on the north side of Herm between Le Petit Monceau and Le Grand Monceau. The narrow entrance passage is at the eastern end of the dolmen, leading into a parallel-sided chamber almost 15 feet long.

Herm only has one church, and this tiny 11th-century non-denominational chapel is beautiful! You’ll find pretty stained glass windows and the loveliest, well-tended garden next to the chapel.

The award-winning coastal gardens on Herm burst with colour and structure. Herm’s mild, frost-free climate enables plants from around the world to grow on the island.

The best way to visit the gardens is on one of the two-hour gardener-led tours which operate weekly, on Tuesdays from mid-April to mid-September. You can buy tickets at the Harbour Office.

Where to Eat on Herm

Herm has plenty of places to eat for such a small island, whatever your taste and your budget. Pretty beach cafes serve homemade snacks and drinks, while the Mermaid Tavern is THE place to meet and mingle over food and drinks.

If you want something more refined, head for the White House Herm Hotel or the Conservatory Restaurant for mouth-watering local crab, lobster and oysters fresh from the fishing boats.

Tipping: Most eateries add 10-15% to the bill as a suggested tip. If you’ve had good service, there’s no need to tip more than this.

Where to Stay on Herm Island

Herm has a good mix of hotel, self-catering, and camping options, but these get booked early! Herm is a real favourite of locals from the other Channel Islands and visitors from further afield.

📍 The ultimate hotel on Herm is the fabulous Herm Island White House Hotel – especially if you splurge and book the luxurious Crow’s Nest suite (sometimes you have to splurge).

With no clocks, TVs or telephones in bedrooms, plus a beachside location and simply exquisite food, this is a real find and the perfect place to relax.

📍 Seagull Campsite is located in an idyllic central spot, moments from the path to Belvoir Bay. With 19 quality frame tents for 6/8 people, this family campsite offers very comfortable camping.

➡️ Check prices and availability for camping at the Seagull Campsite.

How to Get to Herm

The island of Herm is too small to have an airport. You’ll need to fly or take a ferry to Guernsey, then board the Guernsey to Herm ferry from the harbour at St Peter Port (01481 721379). Find flights to Guernsey here.

Location: The Travel Trident ticket office is at the entrance to St Peter Port harbour (in Guernsey), and the boat departs from St Peter Port

Sailing Times vary throughout the year depending on peak times, daylight and tides.

Depending on the height of the tide, the ferry will either drop you off (and pick you up) from Herm Harbour or the Rosaire Steps.

How Accessible is the Island of Herm?

Herm is beautiful; however, there are some accessibility considerations you might need to know about before you book your trip.

Find your comprehensive access guide to the ferry here.

There are steps up from the ferry to the harbour. While there’s a handrail, the harbour is tidal, so you’ll need to take care as the steps can be wet and slippery. The number of steps varies with the height of the tide (from 1 to 7 steps).

There are 15+uneven old stone steps between the landing point and the ferry. Some steps are shallow, but some are quite high – although there is a handrail.

Some central paths are tarmac, others are sand, grass or unfinished, and some slopes vary from easy to steep, while the coastal paths are unsurfaced and uneven, with a mixture of slopes.

At the time of the Battle of Hastings (1066), Herm and the other Channel Islands belonged to the Duchy of Normandy in France. When William the Conqueror became King William I of England, all of the Channel Islands became the property of the British Crown.

During World War II, Herm was occupied by German forces – like the other Channel Islands. When the occupying forces left, Herm was in a very poor state.

The States of Guernsey recognised that Herm was an “unspoilt island idyll that could be enjoyed by locals and tourists alike”, so they bought the island from the British Crown in 1949, and Herm remains part of the Bailiwick of Guernsey today.

Well-behaved dogs are very welcome in Herm! All dogs must be kept on a lead for the ferry journey and in busy public places (well, busy by Herm standards!)

From the first of May until the 30th of September, dogs are not allowed on four beaches, but your four-legged friend can roam free on Bear’s Beach.

In the low season, Herm is perfect for dog lovers, as there’s plenty of dog-friendly accommodation, and dogs can run free on all the beaches.

Does Anyone Live on Herm?

Herm has a population of about 65 permanent residents, including families with children. There’s a teeny primary school, but secondary schooling is provided in Guernsey, where children usually board with local families during the school week.

During the summer season, Herm’s population expands with around 100 seasonal workers moving to the island.

How Big is Herm Island?

It’s a very small island! Just 1 ½ miles long by ½ mile wide with an area of 199 hectares. You can walk around the perimeter of the island (approx 3.9 miles) in about 2 hours, or

Are Cars Allowed on the Island of Herm?

No cars or bicycles are allowed on the island, but there is a “tractor luggage service” to and from the harbour!

So there you have my complete guide to visiting the gorgeous little island of Herm. If you’re thinking of a trip to the Channel Islands, you may find these posts useful for planning your visit:

Jersey vs Guernsey – Which Channel Island Is Best For You?
Discover the Jersey War Tunnels – The Most Popular Attraction on Jersey
8 Incredible Reasons to Visit Jersey
How to Visit Seymour Tower – The Most Southerly Point In Britain

LOVE IT? PIN IT FOR LATER! 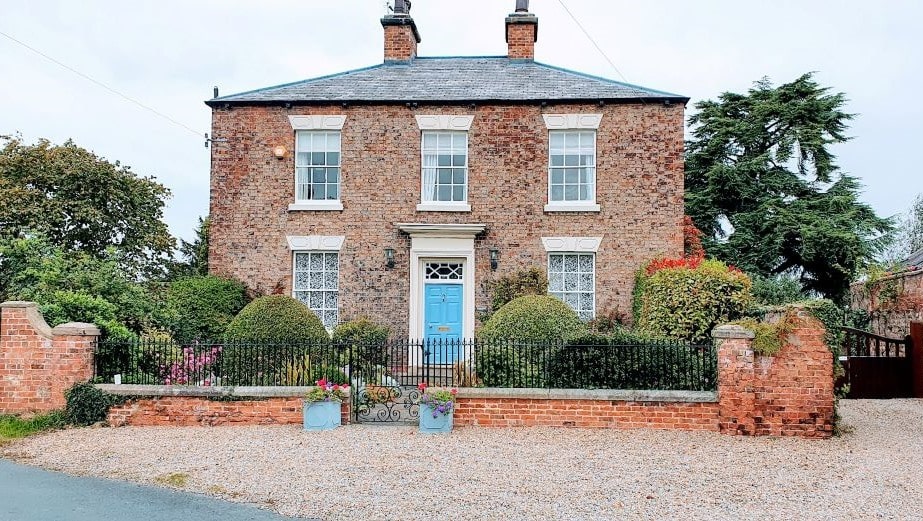 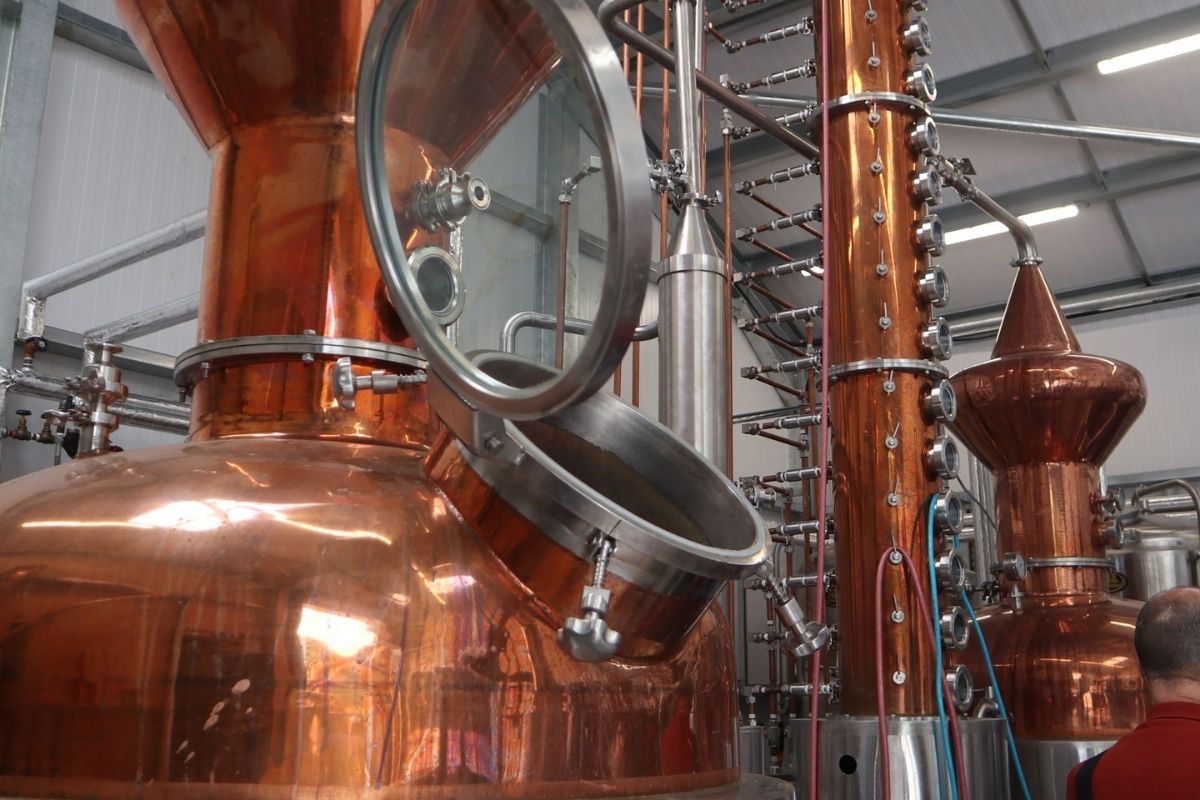 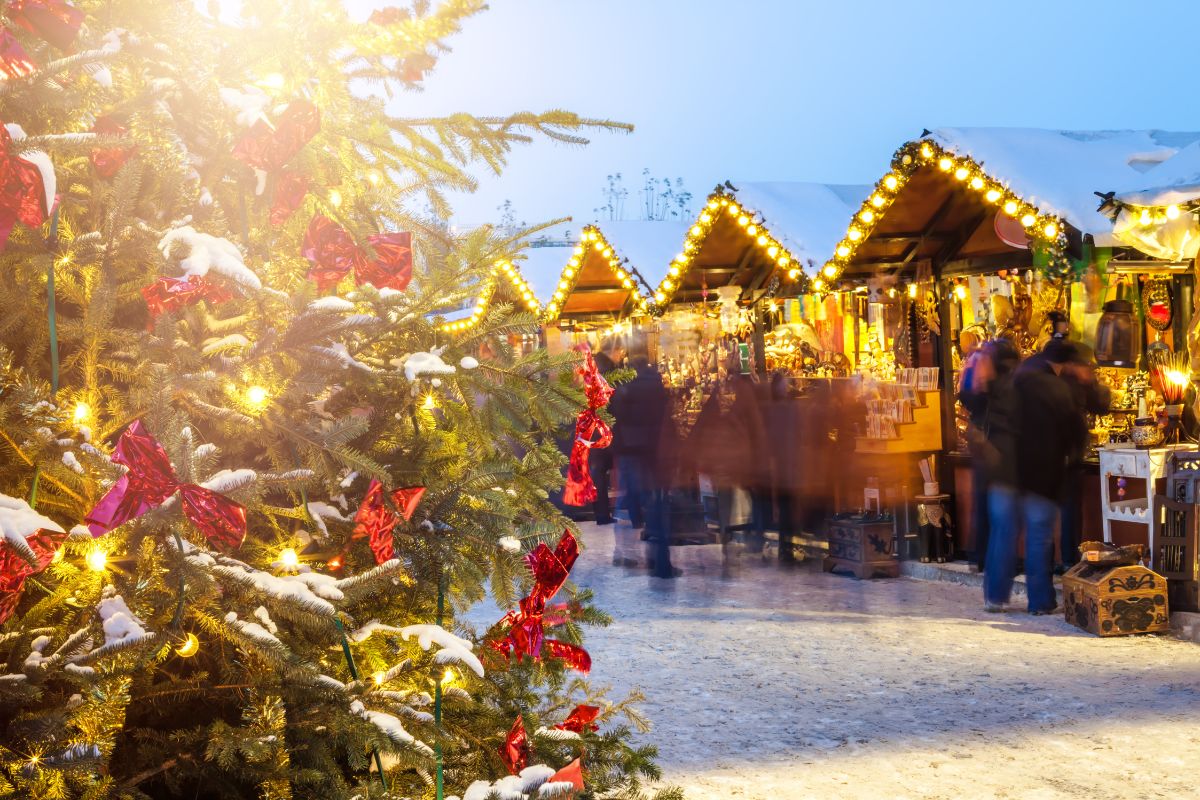 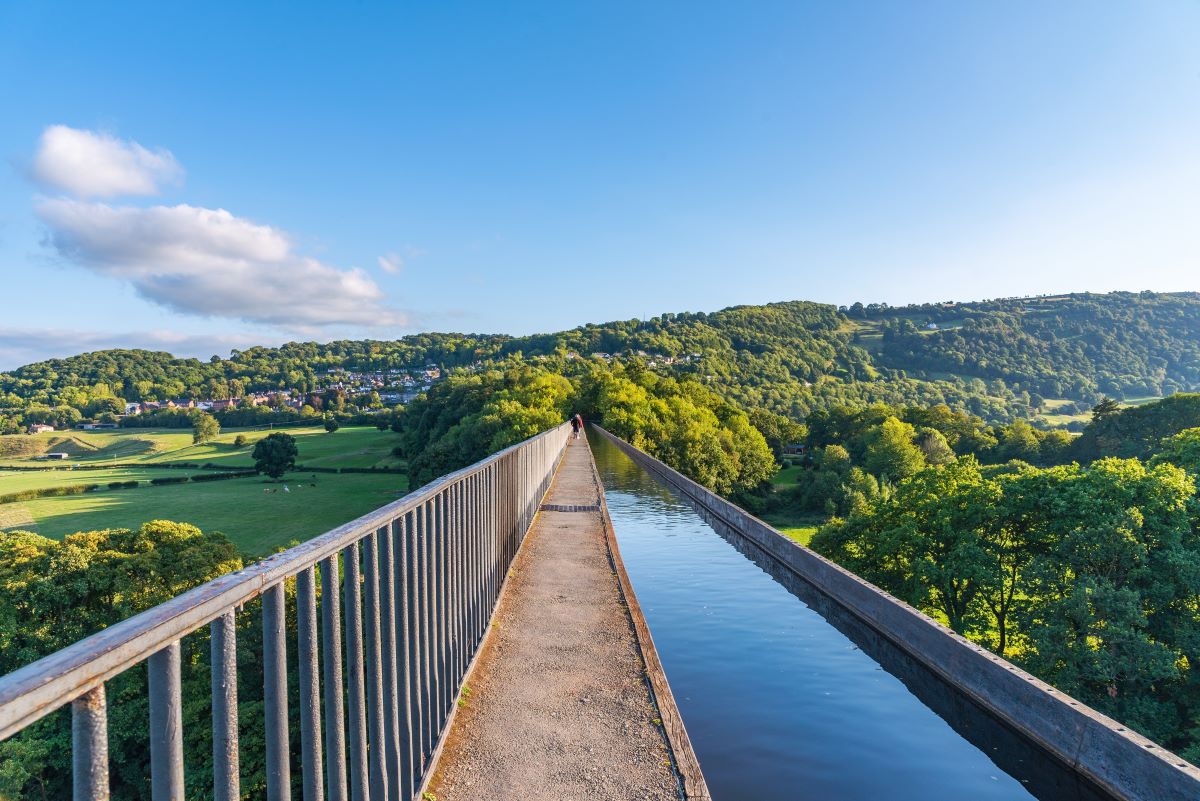