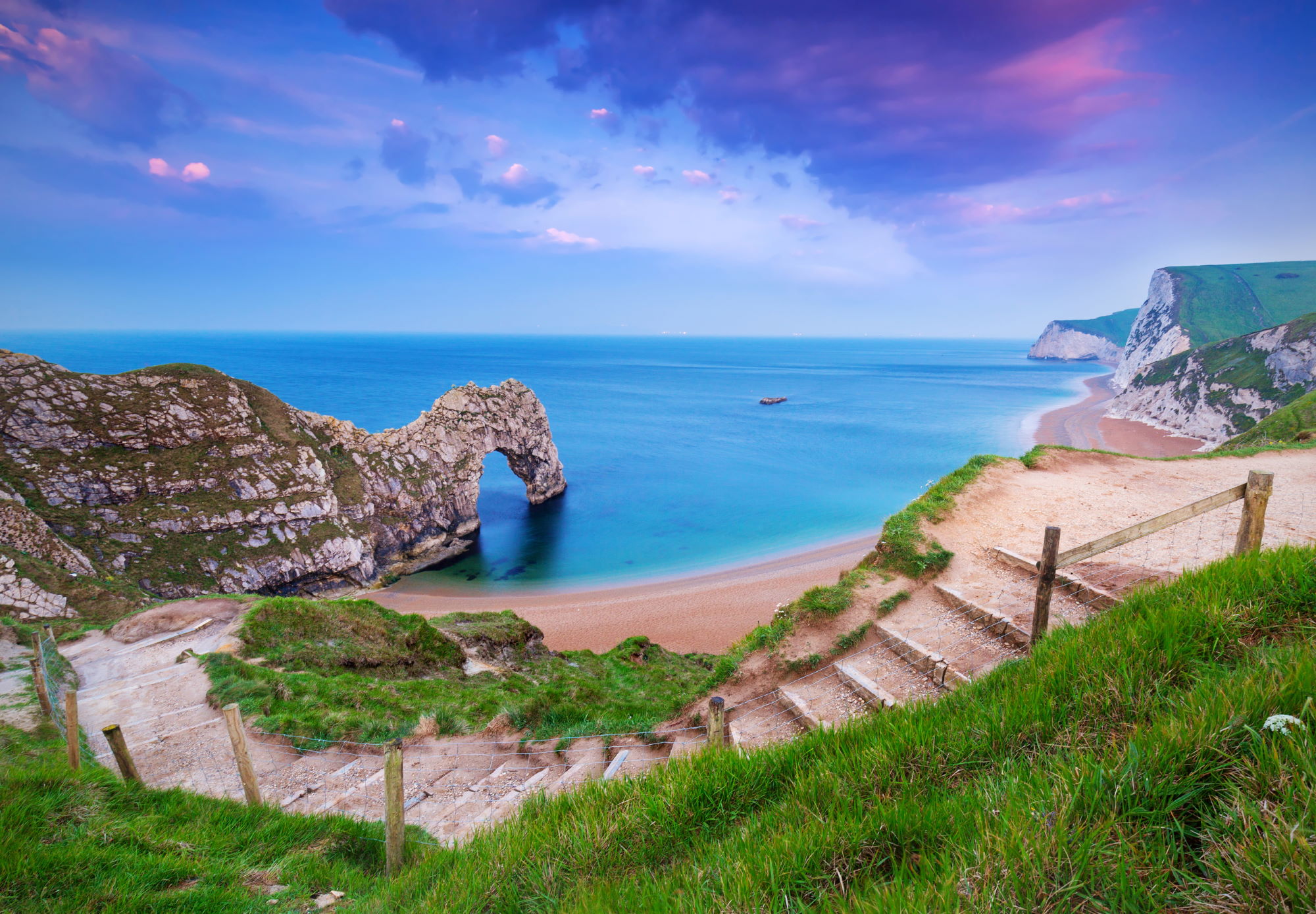 Growing up on tales of fossil hunting on the Jurassic Coast, I’d long wanted to hunt for ammonites of my own. The prospect of the 7+ hour drive from North Yorkshire to Dorset put me off visiting Dorset’s stunning Jurassic coast until recently.

What is the Jurassic Coast?

The Jurassic coast stretches 96 miles along the South West of England, from Exmouth in the county of East Devon to Studland Bay in Dorset. Its geological importance was recognised in 2001, making it England’s first site listed as a UNESCO World Heritage site.

When an opportunity for a sneaky visit to the Dorset coast presented itself unexpectedly. I grabbed it with both hands.

Rudely awoken by the joyful crowing of cockerels heralding the approach of dawn, I knew I wouldn’t be able to go back to sleep. Light streamed through the thin curtains of our VRBO rental, and my itchy feet needed somewhere to explore.

With everyone else slumbering on, oblivious to the advent of another bright new day, I got up, dressed silently, and snuck out like a cat burglar. No one even stirred or noticed. I could probably have put the radio on, made a cuppa, and danced a jig in hobnailed boots.

We were visiting Dorset for the weekend to visit Tankfest as a treat for the teen boy. With a tight schedule, I’d not planned a trip to the coast, but Durdle Door was an enticing 45-minute drive from our caravan in Wimborne.

I could see that the rest of the party would sleep for hours yet – it was only 5 am after all. This was the chance I had been waiting for.

Grabbing the car keys, I closed the car door quietly, backed out of the campsite, and headed off excitedly to Lulworth to see the famous limestone archway at Durdle Door.

The Journey To the Coastal Village of Lulworth

Driving through picturesque Dorset villages on a sleepy Sunday morning, just after sunrise, is enchanting. I recommend it.

As the sun rose, the roads jammed with traffic 12 hours earlier were eerily empty and still. Birds chirped, bunnies hopped, bees laden with pollen buzzed, and trees rustled as I passed. The occasional languid cat looked up as I drove by, but there were few other signs of life.

Some of the villages are chocolate-box pretty, their roads lined with ancient thatched cottages and roses around the door. Abundant old-fashioned hollyhocks, foxgloves, and honeysuckles peep out from every nook and cranny in scenes reminiscent of a Thomas Hardy novel.

Ancient trees intermingle to form a green canopy across the roads, dappling the early morning sunlight that manages to sneak its way through. Far from the madding crowd, indeed.

The scenery was so quaint and rural that I half expected to see yeomen with pitchforks in the fields, milkmaids scurrying in and out of barns, and lumbering farm horses pulling carts through the streets.

Instead, I saw a couple of sweaty MAMILs (middle-aged men in lycra) furiously peddling off the calories from the night before.

Lulworth Cove and the natural limestone arch of Durdle Door are two of the most loved and photographed locations on Dorset’s stunning Jurassic Coast.

Privately owned and managed by the Lulworth Estate, this area of outstanding natural beauty is spotlessly well-maintained. Luckily for my limited time budget, these two sites are also close to each other.

I drove through Lulworth, heading for the parking area at Durdle Door Holiday Park, and paid £4.67 to park for two hours. It’s easy to use – tap in your car registration number and your bank card. When you return to the car park, tap your card again, and you’ll be charged the appropriate amount for your stay.

After paying for the parking, I made for the well-signposted cliff path. Immediately, I realised my first mistake — inappropriate shoes. I’d only brought one pair of shoes for the weekend – open-toed, leather-soled sandals. Very pretty but wholly impractical and with zero grip factor.

The beautifully maintained chalk path down to Durdle Door and the neighbouring Man O’War beach was steep. Very steep in parts, with loose stones and chippings. And no railings.

Luckily at 6 am, there was no one around to see me gingerly picking my way down that path, fearful with every slippery step that I would fall and roll the rest of the way down the hill like a rather rotund middle-aged barrel.

Or that I would roll off the path entirely and plunge headlong into the jagged rocks far below.

I was very careful and a little bit scared. In a flash, I remembered that no one even knew where I was, so I stopped to send a quick text to my son, just in case….

Pro Tip: Take proper walking shoes or, at the very least, a half-decent pair of trainers. Leave the flip-flops at home.

The View of the Jurassic Coast at Durdle Door

The view from the path is incredible. Half terrified, half elated, I had a crystal-clear view across the sea to the west, to the Isle of Portland.

As I neared the end of the path, the top of the Durdle Door archway was revealed, and I could see some of the 150 steps carved into the cliff, down to the Man O’War Beach far below.

Sadly, despite the plethora of signs instructing visitors to take litter away, I was horrified to see a festering pile of rubbish (trash) abandoned on the path.

I wondered who could be so thoughtless and lazy as to do this. Discarded plastic bottles, takeaway boxes, and (horror of horrors) full nappy sacks were dumped brazenly in one of the country’s most scenic spots.

As I approached the viewing area, the gentle breeze tousled my hair, and the iodine tang of sea air filled my nostrils and lungs. Dorset’s stunning Jurassic coast is a truly beautiful place, and it was astonishing to have it to myself – I’d half expected to jostle for position and to vie to get the best place for photos free of other people.

From the lofty heights of the white chalk cliffs, I spied cormorants on the rocks near a couple of hardy kayakers bobbing in the waves, then flurries of jackdaws, rooks, and ravens swirling high above me, riding the air currents and calling loudly. More than a few pecked at the rubbish pile, relishing the spoils…

The limestone archway looks somewhat like a giant dinosaur, with its head in the water and the headland forming its enormous body. The rocks here are known as the Jurassic coast dinosaurs.

One day the archway will collapse as the sea continues to erode the soft limestone at the base, so I’m glad I made the time to see it.

The best place to see the archway is from the pebble beach or high up on the cliff paths. With my time for exploring limited, I scrambled up to the highest point on the cliff path and did my best, but I wish I’d had the time to walk along the beach, go fossil hunting on the Jurassic coast, and take even more photos.

I can only imagine how incredible Durdle Door must be at sunrise or sunset, but I wouldn’t want to negotiate that perilous path in anything less than full daylight!

The solution is to take the easier, more accessible path from Lulworth Cove, which is suitable for all ages and abilities. I wish I’d found that path first!! About 200,000 visitors a year use the route, making it Britain’s most visited coastal path.

I stopped to admire the Man O’War beach too, but the prospect of schlepping down the 150 steps in my stupid sandals and then hiking back up again put me off venturing down to sea level. I had visions of shredded feet, a sprained ankle or worse! Plus, I didn’t have any water with me. There’s always next time!

Checking my phone, I realised I’d spent an hour mooching around this lovely corner of the West Country, drinking in the sights and taking photographs of Dorset’s stunning Jurassic Coast.

As the early morning dog walkers started to arrive, heading for the dog-friendly beaches, it was time for me to tackle the rather breathless hike back up the promontory to the car park. Suffice it to say the calf muscles had a good workout.

I can only imagine how popular this safe little cove must be for families and how it must bustle with life on sunny days in the summer.

How to get to Durdle Door

Find all the up-to-date information to help you take a trip to Durdle Door by road or public transport here.

Lulworth is a small village with a limited but good selection of quality accommodations that gets booked quickly. Lulworth Cove Inn and the Lulworth Lodge are perfect for a romantic getaway, with excellent facilities and food.

If you prefer something a bit quirky and enjoy self-catering, VRBO has a good selection of pretty cottages – some thatched! – in West Lulworth.

Places to Visit Nearby

214 shares
Manage Cookie Consent
We use technologies like cookies to store and/or access device information. We do this to improve browsing experience and to show personalised ads. Consenting to these technologies will allow us to process data such as browsing behaviour or unique IDs on this site. Not consenting or withdrawing consent, may adversely affect certain features and functions.
Manage options Manage services Manage vendors Read more about these purposes
Preferences
{title} {title} {title}